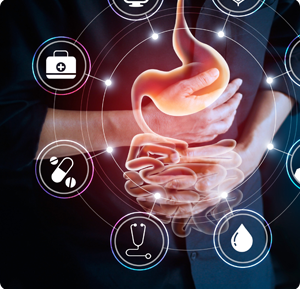 The Barrx treatment offered at North Shore Gastroenterology is used to treat Barrett’s esophagus (BE). This condition is characterized by a change in the lining of the esophagus, in which the tissue is replaced by a tissue similar to that found in the intestinal lining. This change process is called intestinal metaplasia.

Barrett’s esophagus develops as a result of chronic exposure of the esophagus to refluxed stomach acid, enzymes, and bile. It is found most often in people who have been diagnosed with gastroesophageal reflux disease (GERD); however, only a small percentage of people who have GERD will develop Barrett’s esophagus. The condition also has the potential to turn into a type of esophageal cancer. Though the risk of this happening is small, those diagnosed with BE should be screened regularly for precancerous cells.

At North Shore Gastroenterology, we offer advanced radiofrequency ablation (RFA) technology for treating Barrett’s esophagus. You will be sedated while your physician uses the Barrx RFA system to remove the diseased tissue during a short endoscopic procedure. The RFA tool delivers heat energy to remove the layer of precancerous tissue lining the esophagus while sparing healthy underlying tissue. As a result, new, healthy tissue regrows within eight weeks.

The procedure itself takes only 20 to 30 minutes, but you should plan on being at our facility for up to two hours. Since you’ll be sedated, you will need to bring a driver with you to take you home after the procedure.

If you frequently experience acid reflux, it may be time to consult a specialist at North Shore Gastroenterology in Westlake and Brooklyn, Ohio. To schedule a consultation, call (440) 808-1212 or use our convenient online appointment request form.